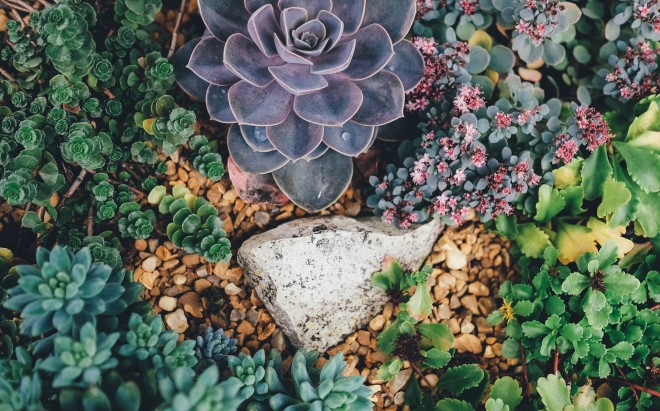 Primarily cut dieded back foliage and stems of herbaceous plants.

Sow hardy annuals into borders at the end of August in order to flower next summer.

Also, do not forget to deadhead, water and feed hanging baskets.

If you want to extend the colour of plants such as Dahlia, roses and Penstemon deadhead them now.

Remember to do not cut off the flowerheads of ornamental grasses.

Remove old leaves and encourage a new flush of growth of hardy geraniums by cutting them back a little.

For a late summer garden propagation, keep an eye on irises and propagate them by dividing the rhizomes. Pinks and carnations can be propagated by layering.

Cuttings of tender perennials such as Pelargonium and Osteospermum should be tooked as soon as possible.

Propagate rock garden plants, such as Helianthemum, Aubrieta and Dianthus from cuttings.

Feed containers and keep picking flowers from the cutting garden for a general maintenance.

Inspect chrysanthemums for the first signs of white rust and remove any Nicotiana showing signs of downy mildew.

Control vine weevil grubs in pots or the ground by applying nematodes.

Set traps for Earwigs (they can make Dahlia blooms ragged) to reduce damage.

Bright green, heavily- armoured looking insects on your plants is not a problem and do not require special control.

Contact our landscaping team if you have a project in mind

Prune wisteria, rambling roses and climbing shrubs such as Pyracantha after flowering. Hebes and lavenders need only a light prune.

Trim hedges and continue shrubs such as roses deadheading to extend flowering.

Keep early-flowering shrubs such as Camellia and Rhododendron well watered during dry periods.

Take Semi-ripe cuttings to propagate many common garden shrubs. Rhododendrons, azaleas and Clematis can be propagated by layering.

Mid or late August is the best time to apply biological controls for vine weevil. Target vulnerable plants such as Rhododendron, Camellia and containerised plants including fuchsias.

Black spot on roses is a very common problem at this time of year so spraying will no longer be effective. Clear fallen leaves and burn them to prevent spread.

Powdery mildew can be a problem if the weather is dry. You can find a weather damage on damaged or disfigured leaves even encounter with a leaf drop.

Mow your lawn lightly and frequently raising the blades on the mower.

Dig over any areas due to be grassed over later in the year and leave them for a few weeks to allow weeds to re-emerge. Then hoe them off to ensure thorough weed clearance before seeding or laying turf in the autumn.

Browning of the lawn is very common at this time of year and it’s not a clear problem. Do not water the grass unless absolutely necessary. It will totally green up when the autumn rains arrive.

Browning can be prevented next year by ensuring that the lawn is well scarified, aerated and drained later in the autumn. Any soil compaction underneath must be remedied before the following growing season.

On fine turf mostly underfed and frequently mown, patches can be the result of diseases such as red thread (on sandy soils) and dollar spot (in damp weather). Feeding usually helps to eliminate these problems.

Remove faded flowers and yellow leaves, cut back aquatic and marginal plants where necessary. Top up water where necessary in ponds and water features.

Leaving fountains on overnight can help you to aerate the water in hot sticky weather.

Remove blanket weed and duckweed from your pond by using a net or rake.

Clearing out fallen leaves and debris regularly will help you to keep down algae growth.

Dry weather in August is a really good time to paint fences, sheds and other wooden features with a preservative.

Clean up patios and hard surfaces to get rid of moss and algae and prevent them becoming slippery during the winter.

Send us a message

This website uses cookies to improve your experience while you navigate through the website. Out of these cookies, the cookies that are categorized as necessary are stored on your browser as they are essential for the working of basic functionalities of the website. We also use third-party cookies that help us analyze and understand how you use this website. These cookies will be stored in your browser only with your consent. You also have the option to opt-out of these cookies. But opting out of some of these cookies may have an effect on your browsing experience.
Necessary Always Enabled
Necessary cookies are absolutely essential for the website to function properly. This category only includes cookies that ensures basic functionalities and security features of the website. These cookies do not store any personal information.
Non-necessary
Any cookies that may not be particularly necessary for the website to function and is used specifically to collect user personal data via analytics, ads, other embedded contents are termed as non-necessary cookies. It is mandatory to procure user consent prior to running these cookies on your website.
SAVE & ACCEPT